The Adventure of Running with Huskies in Finnish Lapland 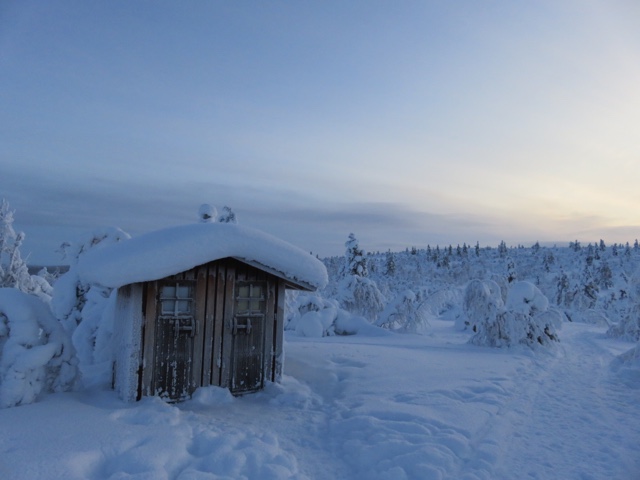 Every single hair of my arm is white and frozen the moment I step out the wooden door. I'm naked. I look up and above me are the stars, the Milky Way, and the quickly changing forms of the northern lights. This deep inside the Polar Circle no citylight pollutes the view up to the univers. The next village is not a village but a pitstop some 40 kilometers southerly from where I stand. Far enough to feel being in the wild in this clear polar night.

It costs me a lot to overcome the resistance but I hear Olli's words carried over by the wind: 'Don't think. Just do it!' So I throw myself in the snow and roll around. Temperatures inside the cabin were minus ten; outside where I'm now lying in the snow looking in a sparkling clear univers they are closer to minus 30 than minus 20 degrees. The good thing I'll go back inside the wood heated sauna.

In the following days I'll get kind of used to it.

Before we arrived here close to the Norwegian border somewhere in nowhere we climbed up the high Tundra. My team of five dogs walk in a steady move pulling the sled with me and some 20 to 30 kilogram of supply. Uphill I step of the sled and start pushing the sled in front of me. I have to run fast to keep up with the dogs. I'm trying to find a good rhythm and pace with them. The cold wind in my face and the effort to push uphill is great for my head. It blows all my thoughts away. There is this hill, me, a sled and a pack of beautiful strong dogs. 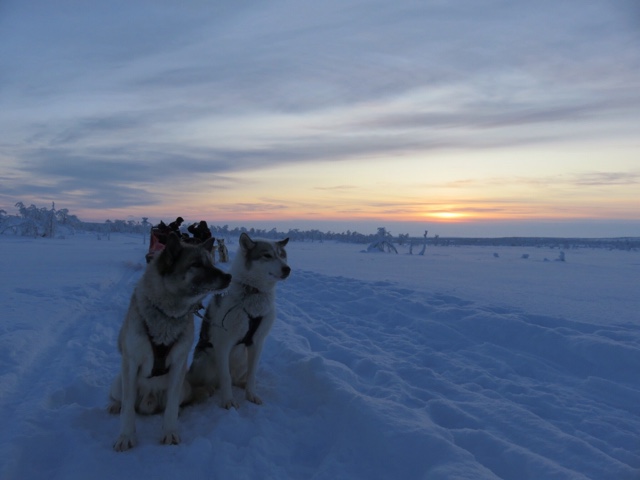 Gods, Presidents and Planets
The first two dogs are the leaders. Zeus a crazy and energetic two year old and a wiser and experienced but constantly working Osman. Osman is named after a famous dog Scott used during the Terra-Nova-Expedition to explore Antarctica in 1912. Scott described Osman as a 'wild wolf-like king dog'. I had the smaller version of Osman. But more then once Osman pushed in the right direction and disciplined Zeus when he wanted to leave the path. 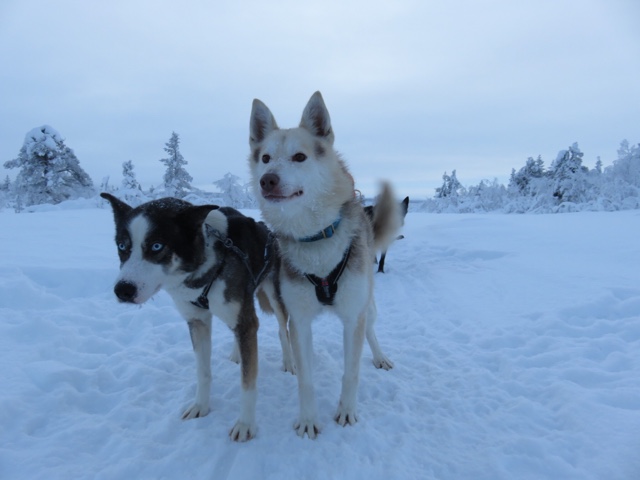 I don't know if it is politically correct to call a black dog Obama but this was the name of a more shy dog in the middle of the harnessed team. He warmed up over the time and started to enjoy some attention as we were together longer. His black fur turns grey when the air freezes around him, making him age like Obama in his second term. I think Obama is a great name for this guy. 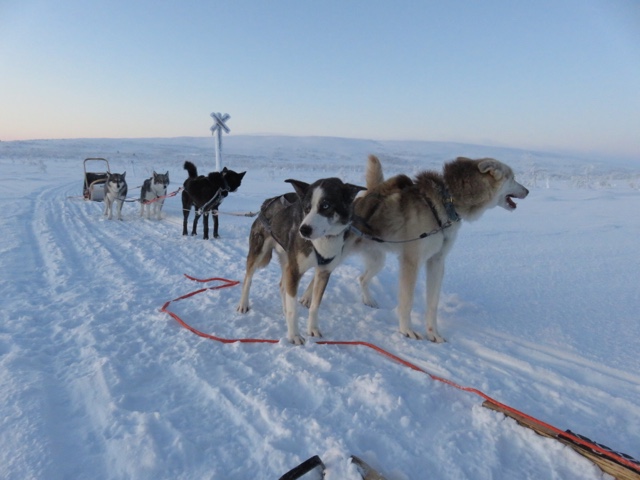 The Planet Pups. I totally fell in love with these two adorable, fluffy creatures - the wheelers or wheels in the back. Mercury was a little grumpy and only accepts to run besides his brother Pluto. He teases Pluto when he feels bored but as he got tired over the days he became calmer and less grumpy. Pluto couldn't be any cuter. His white and light grey fur and all of his soft movements speak for his character. His howling is a high tone and he howled all the time during the breaks. Both went crazy and love the attention. They tried to climb up on me and lick my face. 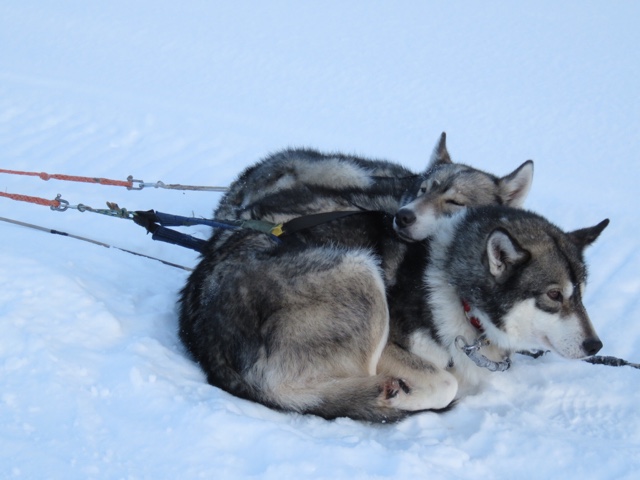 The polar morning
Right before we start in the morning the dogs get harnessed and attached to the lines. Shortly before we leave one dog starts with a low bark and another one starts howling. Soon all thirty dogs begin to howl and bark and the silent polar morning is filled with these archaic call from the past. They give me goose bumps. They now jump and pull in the lines only an anchor deep in the snow prevents them from leaving alone. 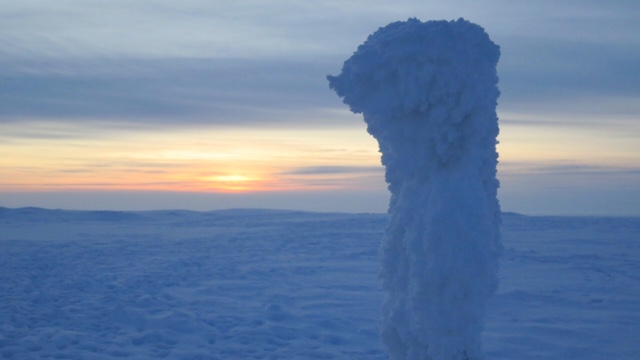 All barking stops the second I release the break and we start with a friendly "Let's go!". Their heads go down and with their back it builds one line like an arrow. They pull hard with their chest against the harness. Their paws on the snow. As the sled moves they fly over the snow. 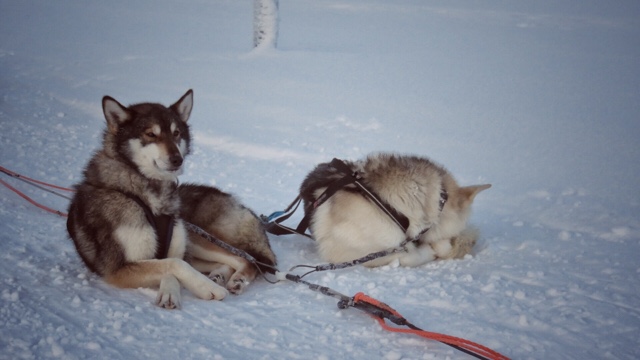 I'm on the last sled which gives me the advantage to go at my own pace. So at times I lose sight of Olli in front of me and I'm alone with the dogs. This adventure is not about speed. It's about the beauty of this world - its diversity. There is a fascinating contrast between these warm and powerful creatures and the frozen surrounding we move through. 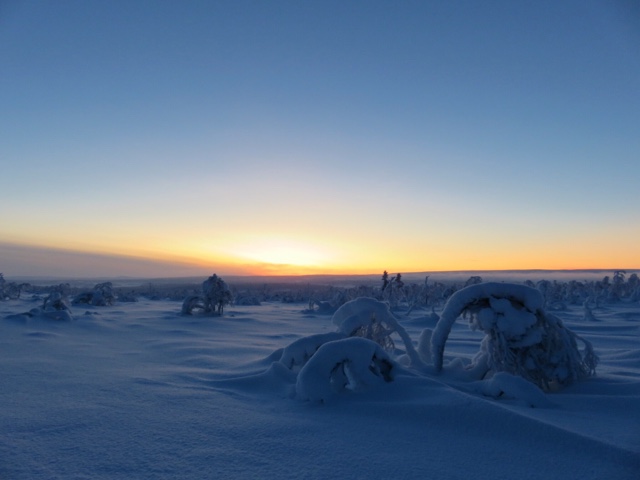 The Polar night is long and so are the sunrises and sunsets. The snow and the sky are in pastel shades that no picture can capture. The wind blew snow in snake-like movements over an ice field up in the high Tundra. What an adventure. 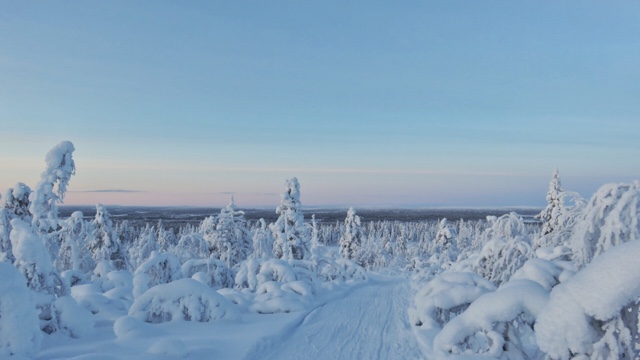 Staying warm
All the winter hikes I did until now were quite rough. For example sleeping in a tent at minus 10 degrees in the Black Forest. But from those little experiments I knew how my body would react to the cold. The first thing that happens is that I get kind of paralysed and stiff. I stare and don't move at all. If I stay like that and ignore it I'll start being apathetic. The moment I realize that I'm getting cold I have to fight in order to heat up the parts that need to be. Here in this case it were my toes, fingers and at times parts of my face - nose and ears. 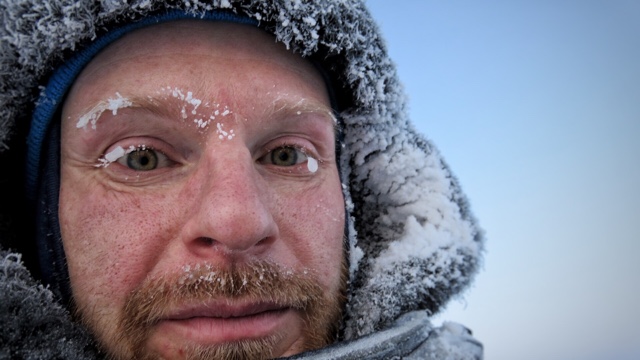 Surprises work great to get warm. I fell several times and kept holding the sled while being dragged over the snow. After those moments I was warm not only from the moving but definetly from the rush of adrenaline. Jumping jacks in the breaks and running with the dogs or paddling with one foot to support them was a good way to pump blood in my extremities. In every situation you can chose between being lazy and feeling cold or working hard and staying warm. Like in real life. Your choice. 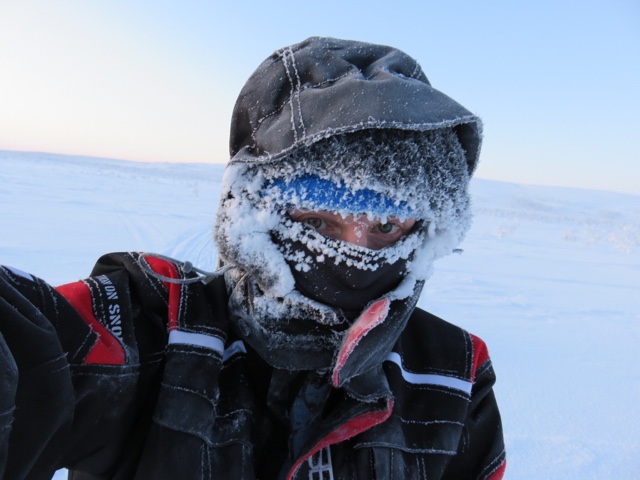 Thanks to the material and several layers on my legs and body. I was warm at the core and didn't have to warm them up. The guides refined the breaks inbetween with hot wilderness-mocha (hot chocolate and instant coffee), cookies and hot soup that helped a lot to stay warm. 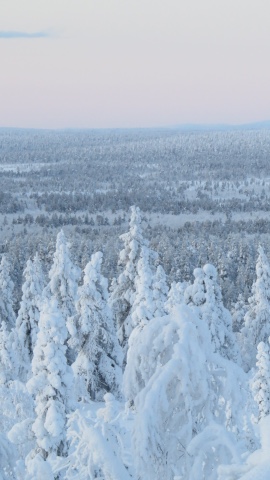 Tough job - Let's talk about the guides
The three guides are a combination of adventures, dog lovers, and athletes. Joe, Evie and the lead guide Emely build a great team. Their tasks reach from guiding the group to taking care of the dogs, cooking and preparing everything for the next day, chopping frozen meat, managing logistics, heating up the cabins and teaching you how to not kill yourself or the dogs on the seld. And this is only what was visible to me. Furthermore, they have to deal with paying and at times surely strange customers at the same time they give those strangers some of their beloved dogs and have to make sure that everything wents smooth while ridding through some of the coldest places on this planet with a max of six hours of sleep every night. 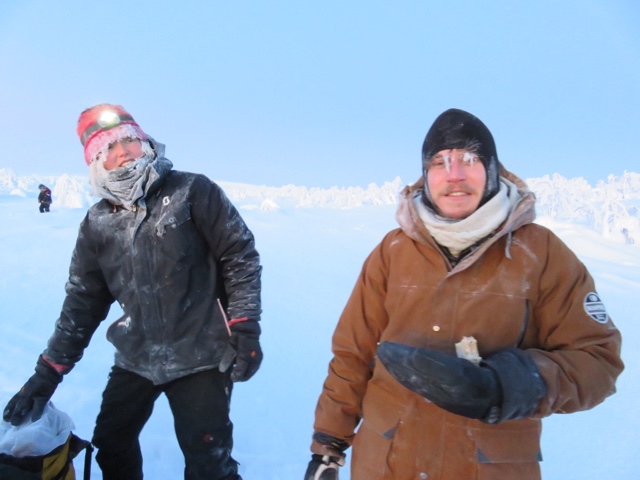 So let's imagine to be in this role and staying optimistic, friendly and with a smile on your face for 5 long days. That was truly impressive and those are the kind of people I really like to have around me! Thank you!

So if you feel like exploring the Polar Circle here in Finland check out the Hetta Husky Farm website. They won several prizes for their sustainable business.

--
Footnotes:
This is a first draft that will be iterated once I have more than an iPad. I'll edit links and enrich later. So don't cry.;)
At my friends at Google - Thanks for nothing and for messing up the blogger app that is meanwhile useless.